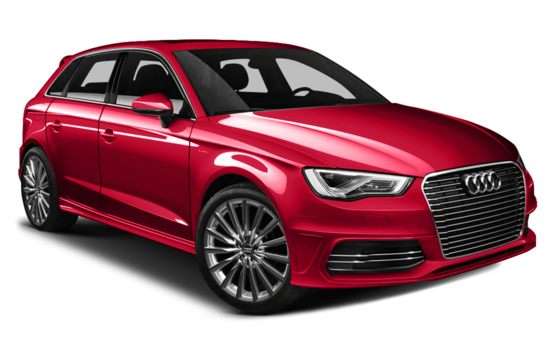 Reintroduced in 2015 to immediate acclaim, Audi’s A3 was heralded as the new benchmark in compact luxury models. For 2016, Audi is offering the A3 in a trio of body styles. The A3 four-door sedan and convertible bowed for the 2015 model year. For 2016, Audi is bringing back the four-door hatchback configuration with a plug-in hybrid powertrain and calling it the A3 Sportback e-Tron.

Propulsion for Audi’s first ever plug-in hybrid comes from a turbocharged 1.4-liter inline four-cylinder engine, combined with a liquid-cooled, permanent magnet-driven electric motor. The A3 e-Tron produces a total system output of 204 horsepower and 258 ft-lbs of torque, which is routed to the front wheels through a six-speed S-tronic automated manual transmission. An 8.8-kWh lithium-ion battery pack provides electrical energy storage and is packaged beneath the rear seat, allowing for a fully usable trunk.

Audi’s four-ringed logo symbolizes the independent manufacturers Audi, DKW, Horch, and Wanderer, which were combined under a single banner in 1932 to create today’s company. In a nod to that history, the thoroughly contemporary Audi A3 Sportback e-Tron’s charging port is hidden behind the logo on the grille when it’s not in use.

In addition to paying homage to the company’s history, this placement also makes recharging the battery pack more convenient. The A3 e-tron comes standard with 240-volt charging equipment, which can also be used in a common 120-volt outlet. With a 240-volt outlet, the battery pack is replenished in about 2 hours and 15 minutes.

The A3 e-Tron offers four driving modes, enabling the driver to maximize efficiency or performance, or find a nice combination of the two. The drive mode selector also permits the A3 e-Tron to be driven purely on electric power for short distances. A charge battery mode uses the gasoline engine to charge the battery while on the highway, generating electric power for city driving. Fuel economy and range have yet to be announced as of this writing.

Smartphone users will benefit from an application Audi commissioned to enable the car’s owner to remotely check on the status of their A3 e-tron. The application can be used to monitor battery status; as well as setting times for charging to begin automatically. This enables plug-in charging to be scheduled during off-peak hours when electricity costs are lowest. The driver can also use the app to adjust the climate control system to remotely condition the car’s temperature while still it’s plugged in for added comfort and energy savings.

The first of an entire array of Audi e-Tron models, pricing starts at $37,900. As with most new electrics, applicable federal and state incentives and tax credits should make the price considerably lower.

People who viewed the Audi A3 e-tron also viewed: