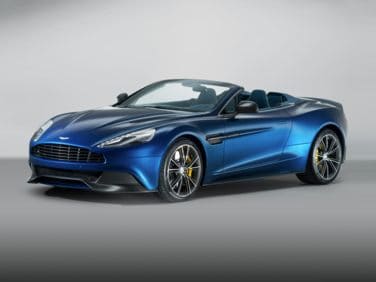 All About Aston Martin Vanquish

Though the Aston Martin Vanquish did not become available until 2001, it looked a lot like the Project Vantage concept that was previewed at the North American International Auto Show in 1998. At the time of its introduction, the Aston Martin Vanquish featured a V12 engine that produced 450 brake horsepower and was paired with a six-speed manual transmission. The aluminum and carbon composite chassis added strength while reducing weight. This version of the Vanquish persisted until 2005, and a total of 1503 units were built during its four-year run. In 2004, Aston Martin showed two concepts at the Geneva Motor Show that were based on the Vanquish. The Zagato Roadster and the Bertone Jet 2 both had strong ties to the outgoing Vanquish model.

The Aston Martin Vanquish S was the replacement for the original Vanquish. It was built from 2004 until 2007, with a total production run of 1086 cars. The Vanquish S looked quite similar to its predecessor, although Aston Martin’s design staff did implement some revisions. The Vanquish S got a new wheel design, a tweaked nose, a new spoiler with an integrated third brake light, larger brakes, and a front splitter to improve aerodynamics. Buyers of the Vanquish S could also opt for a sports package that offered upgraded suspension, brakes and steering. Aerodynamic upgrades improved the performance specifications of the Vanquish S, and it also featured a more powerful engine than its predecessor, yielding an additional 70 horsepower and a top speed of more than 200 miles per hour. This made the Vanquish S the fastest Aston Martin to date, at least until the Vanquish was later reintroduced. The end of the Vanquish S model run was celebrated by a special edition that featured an exclusive color and other aesthetic features. When the last Vanquish S rolled off the production line, Aston Martin closed the factory, which had been in operation for 49 years. Aston Martin production continued in other facilities.

When the new Aston Martin Vanquish was announced, as a replacement for the outgoing DBS, it was noted that in some ways, the Vanquish was more an evolution of the DBS than of the previous Vanquish models. This is especially noticeable on the car’s exterior, evident in design cues such as the integrated rear spoiler and the exposed carbon fiber trim elements. Unlike the earlier versions of the Vanquish, the current model uses a carbon fiber chassis and body, and it is available in the usual coupe format as well as a 2+2 version, in case passengers really want to squeeze into the backseat. A completely new interior features hand-stitched leather and alacantara finishes. This time around, the V12 engine gives out 565 horsepower but is only available with an automatic transmission. Aston Martin chose the Vanquish to debut its launch control feature, which may help ease the pain of being unable to shift. Customers began receiving their new Vanquishes in Europe near the end of 2012.