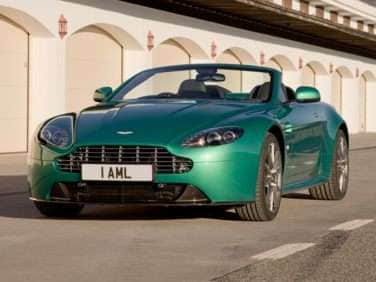 Aston Martin Lagonda Limited is a luxury sports car company that is based in England. The company was founded in 1913, and has a long history of being partnered with and acquired by other automotive manufacturers. Between 1994 and 2007, Aston Martin was owned and controlled by the Ford Motor Company, although the company was partially acquired by an investment group in 2007. Under Ford’s ownership, the company got a new production facility in 1994, ramping up the company’s output as well as marking the first time Aston Martin vehicles were mass produced. In 2012, another investment group put up funds for partial ownership of the brand, further dividing the company. Though many Aston Martin models are produced at the company’s own factories, Aston Martin also enlists the services of Magna Steyr, a coachbuilding company based in Austria, to produce some Aston Martin models under contract. Ford still manufactured Aston Martin V8 and V12 engines in German facilities until 2013, at which point Aston Martin entered a new agreement with Mercedes-Benz for the supply of some mechanical components.

Aston Martin equips the V8 Vantage S with its aluminum 4.7-liter V8 engine, tuned and tweaked for better performance. The engine in this model gets improved airflow, a new muffler design, and revised programming that tweaks the exhaust system. These changes result in a gain of 10 horsepower over the base V8 Vantage, yielding a total output of 430 horsepower. The engine in the V8 Vantage S is also paired to a new transmission, though, which helps improve the vehicle’s acceleration. It’s a single-clutch seven-speed automated manual, which complements a rear limited-slip differential. The V8 Vantage completed the 0-60 sprint in 4.3 seconds; the V8 Vantage S accomplishes the run in just 4 seconds.

The Aston Martin V8 Vantage S features cast aluminum 19-inch wheels, which cover 15-inch brake rotors and six-piston calipers in front, and 13-inchers with four-piston calipers in the rear. The V8 Vantage S also gets a quicker steering rack for better speed-sensitive steering. The new S model weighs about 100 pounds less than the original V8 Vantage, too, for improved handling and response. Aesthetic upgrades are subtle, inspired by the rocker panels, front and rear fascias, and rear profile of the top-of-the-line Aston Martin V12 Vantage.