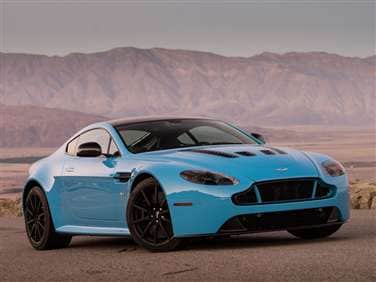 All About Aston Martin V12 Vantage

Introduced in 2003 as a concept car at the North American International Auto Show in Detroit, the production version of the Aston Martin Vantage was first shown at the 2005 Geneva Motor Show. The V12 version of the Aston Martin was unveiled in 2007. The main difference between the two cars is the 510-horsepower, 6.0-liter V12 engine, which is capable of generating some 420 ft-lbs of torque. Zero to 60 is quoted at 4.1 seconds and top speed is quoted at 190 miles per hour.

To ensure optimal weight distribution, the six-speed manual gearbox is mounted at the back of the chassis near the rear wheels. Rear drive and the manual transmission are the only configurations offered for the palatially appointed 2 + 2 grand tourer. Visually, the V12 can be distinguished from the V8 by the louvers in the carbon fiber engine cover of the V12 Vantage. Stiffer front springs were fitted to the Vantage to support the additional weight of the V12 engine.