According to the American Heritage dictionary, a station wagon is an automobile with one or more rows of folding or removable seats behind the driver and an area behind the seats into which suitcases, parcels, etc., can be loaded through a tailgate.

While the description is correct, to millions of Americans of a certain age, a station wagon is the car they grew up with, what their parents drove them to school in, what they went out on their first date in, and maybe even where they first became intimately acquainted with…well…you know.

Ironically, with all of those seemingly good memories behind it, the station wagon also came to represent all that was wrong with their parents. By the late 1980’s, when those people starting buying cars in earnest, the station wagon fell out of favor and their kids grew up with minivans and SUVs.

Whether favored or not, there is no escaping the fact that station wagons bring to the fore a driving experience minivans and SUVs cannot match.

What follows is our list of the ten most affordable station wagons for 2012.

As a demonstration of just how blurred the line of demarcation between station wagons and hatchbacks has become, there are those who consider the Dodge Caliber more of the latter than the former. Given the stigma attached to wagons the marketers at Dodge aren’t doing anything to convince buyers one way or the other, as long as it sells.

The front-wheel-drive 2012 Dodge Caliber is powered by a 158-horsepower 2.0-liter four-cylinder engine that generates141 ft.-lbs. of torque. A five-speed manual transmission is standard on the base model. A continuously variable automatic transmission (CVT) is optional.

There is no questioning the fact the Jetta SportWagen is a station wagon, VW even says so in its nomenclature. Delivering everything we love about the VW Jetta with an extra dollop of utility makes the Jetta Sportwagen one of the best picks on this list of the most affordable station wagons. Further, it’s fun to drive, handsome and nicely appointed.

Is it a station wagon, or a small crossover?

Only MINI knows for sure and they ain’t telling.

From where we’re sitting though, the Countryman is a station wagon. After all, it has a row of folding seats behind the driver. Instead of a luggage compartment it also has an area behind the seats into which cargo can be loaded through a tailgate. The Countryman’s roof extends rearward over shared passenger/cargo volume with access at the back via a third or fifth door (the liftgate or tailgate), instead of a trunk lid.

That, to us, says…Station Wagon!

A 121-horsepower 1.6-liter inline four-cylinder engine produces 114 pound-feet of torque to power the base version of this affordable 2012 station wagon.

A six-speed manual transmission is standard, a six-speed automatic is optional.

As a variant of the outstanding Subaru Legacy, the Outback is equally reliable, sporty and capacious, but with more of an adventurous edge. Brought into being to give Subaru some grip during the SUV boom, the Outback’s intentions (given its just under nine inches of ground clearance) are more crossover suv than station wagon.

No matter how high you go, you can’t escape your DNA though.

This member of the best affordable station wagons list comes with standard features like folding and reclining rear seats, a four-speaker sound system with a CD player and an auxiliary audio input jack.

The base model Outback 2.5i is powered by a170-horsepower, 2.5-liter horizontally opposed flat four-cylinder that produces 170 ft.-lbs. of torque. Transmission choices for the all-wheel drive station wagon are between either a six-speed manual or a CVT.

Toyota’s Prius v is the only hybrid model on our list of the best affordable 2012 station wagons. All new for the 2012 model year, Prius v brings to the fore everything we like about Prius, with more room to do it in.

Remarkably, unless you see the Prius v side by side with the standard Prius, you might never realize it’s something different. But it is, providing an additional six inches of length, three inches of height, and a three-inch longer wheelbase.

The output of the 1.8-liter four-cylinder engine is teamed with a pair of electric motors and routed through a CVT. The powertrain offers a combined total output of 134 horsepower and 153 ft.-lbs. of torque.

Another model blurring the line between hatchback and station wagon is the Audi A3. Given it’s essentially a VW Golf wagon with a nicer interior and Audi badges, we’re going to go with station wagon on this one too.

This model of our most affordable 2012 station wagons is available with either a gasoline (A3 2.0T) or a diesel (A3 TDI) engine. A3 2.0T uses a 200-horsepower, 2.0-liter turbocharged four-cylinder gasoline engine with 207 ft.-lbs. of torque. Front-wheel drive and a six-speed manual transmission are standard. Audi’s six-speed dual-clutch automated manual transmission (AKA S-tronic) is available as an option.

The A3 TDI features a 140 horsepower, 2.0-liter turbocharged four-cylinder diesel producing 236 ft.-lbs. of torque. The S-tronic transmission comes standard with the diesel engine.

That Venza does so with some style is an additional point in its favor.

The base engine is Toyota’s 182-horsepower, 2.7-liter four-cylinder engine, which produces 182 ft.-lbs. of torque. Its six-speed automatic transmission feeds the front wheels. All-wheel drive is available as an option.

OK, we’ll admit we got no idea what to really call the Ford Flex.

It fits so neatly into so many categories.

Is it a minivan?

Is it a crossover SUV?

Is it a station wagon?

It looks like a wagon, so we’re adding it to our list of 2012 affordable station wagons. Although, as you may have noticed, that term “affordable” has become relative—big time—as the Ford takes our most affordable wagons list into the realm of $30,000 automobiles.

Ford’s 3.5-liter V6 runs 262 horsepower and 248 ft.-lbs of torque through a six-speed automatic transmission and front-wheel drive in the Flex. All-wheel drive is optional.

One of the main advantages of station wagons over crossovers or SUVs is the fun to drive aspect they bring to the road. Acura’s TSX Sportwagon is absolutely one of those. Combining an athletic demeanor with luxurious sensibilities, the TSX is a car that appeals to a broad number of people—while offending hardly anyone.

Bluetooth for telephone connectivity and audio streaming is standard. That audio will feed into a seven-speaker sound system with a CD player, satellite radio, an auxiliary audio input jack and a USB port.

A 2.4-liter four-cylinder makes 201 horsepower and 170 ft.-lbs. of torque to power the base model TSX. A five-speed automatic transmission with sport shift paddles is standard equipment.

Easily the most rugged station wagon on our list, the 2012 Volvo XC70 is just as capable off road as many renowned sport utility vehicles are. Frankly, there’s hardly anyplace the Volvo won’t go. That the vehicle manages to do this while still maintaining the carlike attributes we appreciate about station wagons is a remarkable feat of engineering.

Bluetooth telephony and audio streaming are paired with an eight-speaker sound system also fed by a CD player, satellite radio, an auxiliary audio input jack, and an iPod/USB audio interface.

Powering the 2012 Volvo XC70 is a 240-horsepower, 3.2-liter inline six-cylinder engine producing 236 ft.-lbs. of torque. A six-speed automatic transmission and front-wheel drive are standard equipment, while all-wheel drive is optional. 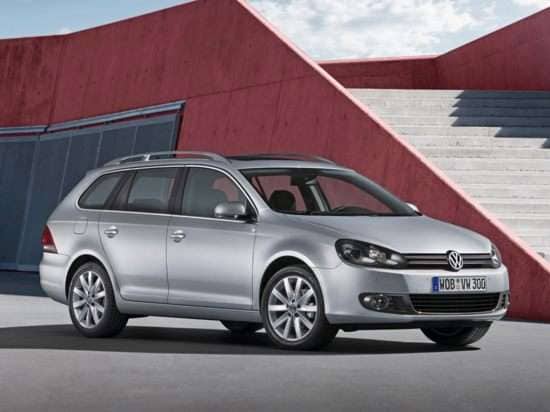