The Acura ZDX is a four door five passenger aggressively styled SUV, powered by a 3.7 Liter VTEC six cylinder making 300 HP being channeled through a six speed Sequential SportShift automatic with paddle shifters and down to the ground via a Super Handling All Wheel Drive system, returning an estimated 16 MPG in the city and as much as 23 MPG on the highway.  The Japanese automaker offers the luxury utility vehicle in three trim levels: standard, the ZDX with Technology Package and the top of the line ZDX with Advance Package.

Starting at $46,020 all ZDXs come with sport seats wrapped in full grain leather, Bluetooth HandsFreeLink wireless connectivity and a backup camera displayed in the rearview mirror.  While audio entertainment duties are handled by an eight speaker stereo system complete with XM Satellite radio, an auxiliary input for mobile media storage devices as well as a six disk in dash CD changer.

The $50,520 Technology Package adds the Acura Navigation System, which upgrades the sound package to an Acura/ELS Surround 10 speaker sound system complete with AM/FM/XM/CD/DVD/MP3 capabilities, that can all be controlled by voice commands.  The Acura Navigation System is home to an assortment of informative functions ranging from Traffic Rerouting to Zagat Surveys and even the weather; there is also a multi-view rear camera to make backing up a little easier.  Complimenting the ZDX’s newfound technology is a luxurious Perforated Milano Premium Leather interior as well as keyless entry and a push button starter.

The top of the line Acura ZDX with Advance Package gets heated and ventilated front seats as well as interior ambient lighting and a premium brushed tricot headliner.  While safety features like and integrated dynamic suspension, blind spot information system and a collision mitigating braking system make the $56,570 luxury SUV worth the extra cost. 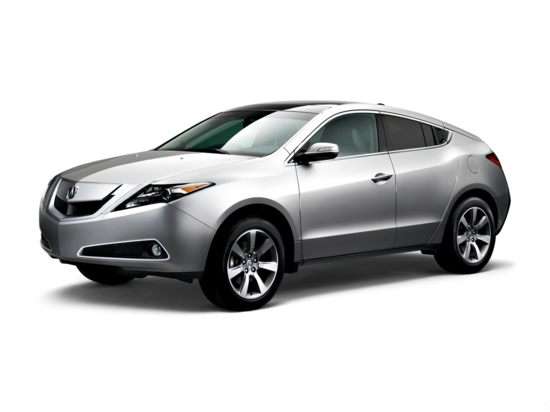