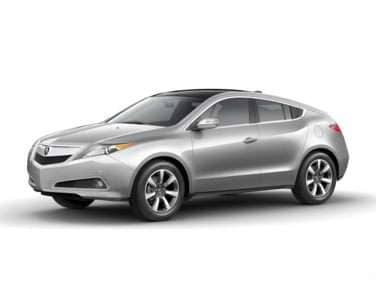 All About Acura ZDX

Introduced in 2009, as a 2010 model, the Acura ZDX has been said to be an answer to a question nobody really asked. Now on the face of it, that might sound like a damning assertion, but not necessarily. Sometimes people don’t know what they want until they see it. In 2009, the motoring public got its first look at the Acura ZDX.

Based on Acura’s popular MDX crossover utility vehicle, the ZDX was intended to capitalize on the popularity of that model while introducing a sportier edge to the concept. To this end, the ZDX features a two-door coupe profile, rather than the four-door hatch look of the MDX.

Aside from that, there’s really not a whole lot of difference. Which is slightly problematic because the MDX, its less rakish appearance notwithstanding has been established to be a better performer, both dynamically and practically. In this case, the compromises made to the MDX package to produce the more sleek appearance of the ZDX created some less than optimal situations. Rear seat headroom is diminished, thanks to the fast rear window treatment; further cargo capacity is compromised as well, because the compartment’s height is reduced.

Power is produced by Acura’s 3.7-liter V6, which is capable of delivering 300 horsepower and 270 ft-lbs of torque. A six-speed automatic transmission with paddles for manual shift control. The ZDX offers Acura’s Super Handling All-Wheel Drive system’s ability to apportion power to whichever wheel needs it the most, as well as accelerate the outside rear wheel in cornering situations to improve turn-in. The ZDX also offers an adjustable suspension system in an effort to enhance its sporting appeal.

For its final year of production (2013), Acura offered the ZDX in one state of trim with features including; a 435-watt surround audio system, navigation with voice recognition, a rearview camera, Bluetooth for telephones and audio streaming, and keyless entry and start, as well as a dual-zone automatic climate control system.

The Acura’s safety package includes forward collision warning, lane departure warning, ABS, stability and traction control, and a full complement of airbags. NHTSA awarded the ZDX four out of five stars in frontal crashes, and a full five stars in side impact situations. The IIHS rated the ZDX “good” (its top designation) in frontal offset, side impact, and roof strength tests.

Given Acura has ended production of the ZDX with the 2013 model year, perhaps it was the answer to a question nobody asked because they simply weren’t interested.