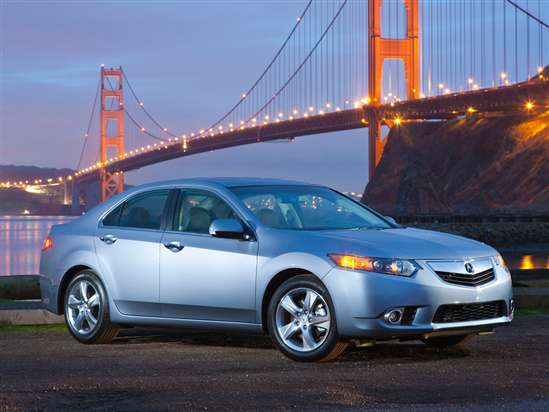 Acura makes no changes to the TSX for the 2014 model year. If you want one, you’d better hurry. This model disappears once the new 2015 Acura TLX arrives in showrooms.

The 2014 Acura TSX is, essentially, a version of the Honda Accord model sold in Europe. Offered as a 4-door sedan or a 5-door station wagon, the 2014 TSX is available in standard or Special Edition trim. The Special Edition model adds a mild body kit, a revised wheel finish, aluminum pedal covers, silver paddle shifters, and red interior accents, gauge lighting, and contrast stitching for the seats.

A Technology Package is optional for the standard TSX, but not the Special Edition model. It includes a navigation system, a reversing camera, an upgraded audio system, a more sophisticated climate control system, and more.

The TSX Sedan can be optioned with a 280-horsepower, 3.5-liter V-6 engine. The V-6 is paired exclusively with the 5-speed automatic transmission, and is accompanied by upgraded brakes and larger 18-inch aluminum wheels. All TSX models are equipped with front-wheel drive.

The National Highway Traffic Safety Administration (NHTSA) has not performed crash tests on the Acura TSX. In tests conducted by the Insurance Institute for Highway Safety (IIHS), the TSX received the highest rating of “Good” in all assessments except for the small overlap frontal-impact test, for which the car scored a “Marginal” rating.

Add the optional Technology Package to the 2014 Acura TSX and the car is equipped with a premium sound system, a navigation system, real-time traffic and weather reports, a reversing camera, and a solar-sensing, GPS-linked automatic climate control system.