The Acura TSX Sportwagon is a four door five passenger estate, which combines the Japanese luxury automaker’s build quality with sharp aggressive styling and a very functional layout that offers up to 60.5 cubic feet of cargo capacity (with the second row folded flat).  Powered by a 2.4 Liter i-VTEC four cylinder turning out 201 HP channeled through a five speed Sequential SportShift automatic gearbox and gets and estimated 22 MPG in the city and as much as 30 MPG on the highway.  Acura offers the entry-level TSX Sportwagon in just two trims, standard and with the Technology Package.

Starting out at $31,160 all Sportwagons come equipped with luxury amenities like perforated leather trimmed seats, dual zone air conditioning with humidity control and air filtration as well as a seven speaker stereo with a USB input for iPods and other mobile media devices as well as Bluetooth HandsFreeLink wireless connectivity and 25.8 cubic feet worth of storage space behind the rear seats.  Meanwhile, the TSX Sportwagon with the Technology Package gets upgraded with an Acura/ELS Surround 10 speaker sound system complete with AM/FM/XM/CD/DVD/MP3 capabilities, that can all be controlled by voice commands.  The Acura Navigation System works in conjunction with the rearview camera to display where you’re going in reverse as well as an assortment of informative functions ranging from Traffic Rerouting to Zagat Surveys and even the weather.  To top things off, owners can raise the tailgate with the click of a button on their key fob, all for $34,810. 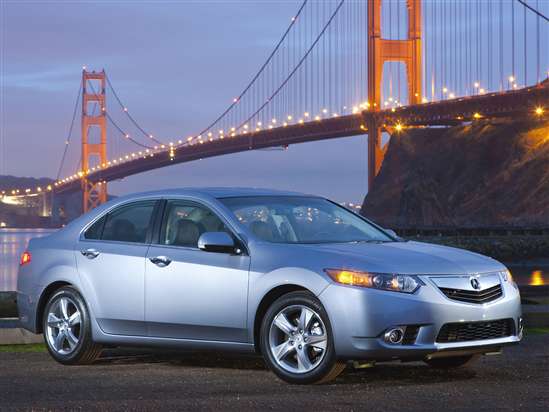