Stylish and competent but without an ace to play

Introduction
By Ron Perry
When choosing an entry-level luxury car, some people want a car that exudes status like a Mercedes-Benz C230, others want the handling and performance a BMW 325i delivers, and then there are those who follow their heart and go for the looks of say, an Audi 2.0T or Lexus IS 250. But the secret is that Acura builds a car that meets all three criteria, while providing great value. It’s the 2006 Acura TSX.

To keep the TSX competitive, Acura has added five horsepower and given its crisp-looking entry sedan a mild exterior freshening. We think this is enough to keep the TSX in the hunt with Audi, BMW, Lexus, and Mercedes – especially at its $28,505 entry price (including $615 destination fee). The refreshed TSX lands right into the mix in terms of power, and the massaged bodywork gives the TSX a sportier and more aggressive appeal.

Making a compelling case for itself, the 2006 Acura TSX does everything an entry-level luxury car should, and does it well. However, it doesn’t excel in any particular category. Unlike the competition, you can’t get a V6 or AWD by spending a little extra cash. Aside from the value it possesses, no singularly spectacular characteristic sets it apart from the rest of the class, making it the stealth car of the entry-level luxury class and a great choice for those that like to fly below the radar. Unfortunately for Acura, most entry-luxury car buyers want to proclaim to the world that they’re on the fast-track to success.

Overview Optioning your 2006 Acura TSX is easy. Loaded with luxury options as standard equipment, the only options are an automatic transmission and a navigation system.

Acura makes it easy to select a 2006 TSX, which comes in one trim level with your choice of a manual or automatic transmission and an optional navigation system with voice recognition technology. Just because there isn’t a long list of options, don’t think you’re getting stuck with a basic car. The 2006 Acura TSX comes standard with leather upholstery, heated and power adjustable front seats, a power glass moonroof, HID headlights, and a premium sound system.

Under the hood, the TSX’s 2.4-liter four-cylinder engine gets a five horsepower increase, but it’s barely noticeable – especially with the automatic transmission. Because it’s a high-revving motor equipped with variable valve timing, the Acura TSX’s power is best accessed with the manual transmission, stirring the gears to keep the motor in the upper end of the rev range. Keep that in mind when buying, because the TSX’s entire character is determined by your transmission choice. With the six-speed manual, the 2006 Acura TSX is fun and sporty if you keep the revs up. With the five-speed automatic, the 2006 Acura TSX is just another mundane, but nicely appointed, commuter car.

Outside, the TSX gets new front and rear bumpers that incorporate sharper lines, as well as revised side sills and a refined grille. The headlights and taillights have also undergone minor changes. The 2006 Acura TSX rides on new nine-spoke, 17-inch wheels wearing Michelin P215/50R17 all-season performance tires. Four-wheel disc, antilock brakes (vented up front) bring the TSX to a stop. Road shock and body motions are absorbed and controlled by a double wishbone, sport-tuned front suspension and a five-link rear suspension utilizing an aluminum knuckle and double tubular wishbones. The aluminum knuckle produces a weight savings of 13.2 pounds and provides 50-percent better rigidity. The TSX is also equipped with rack-and-pinion steering, and a front shock tower bar helps keep turn-in crisp.

New for 2006, the Acura TSX features an electronic brake assist system. Microprocessors analyze the driver’s braking habits under normal conditions, and when braking is applied that is out of normal parameters the system fully activates the ABS to stop the TSX as rapidly as possible. The 2006 Acura TSX is also equipped with Vehicle Stability Assist (VSA), better known as stability and traction control. When it comes to safety, the 2006 Acura TSX ranks high in crash tests as well as in features. This year, the Acura TSX comes standard with dual-stage front airbags, driver and front passenger side airbags, side-curtain airbags for all outboard occupants, and the usual roster of safety features found on all new cars. Thanks to this safety gear, and solid engineering, the 2006 Acura TSX achieves a five-star front NHTSA rating as well as a five-star front side- and four-star rear side-impact score. In the offset crash test conducted by the Insurance Institute for Highway Safety, the TSX gets a “Good” rating. Consumers expect safety when purchasing a luxury vehicle and the 2006 Acura TSX delivers.

Aside from the automatic transmission, the only thing that potentially holds the 2006 Acura TSX back is the fact that both Audi and BMW offer a four-year/50,000-mile warranty that includes all scheduled maintenance during that period. Acura doesn’t. Good thing it’s essentially a Honda, and not a German-engineered sport sedan that’s expensive to maintain.

Driving Impressions The 2006 Acura TSX is refined, comfortable, and fun to drive, especially with the standard manual transmission.

Clearly, nothing fundamental has changed on the Acura TSX since the last time we drove one. Quoting from our last test of a 2004 model with a manual transmission: “It’s an amazingly refined and sporty four-cylinder, front-wheel-drive sedan with a powerful and responsive engine, flawless suspension, seductive gear shifting, and a classy leather interior.” After spending a day driving the updated 2006, we feel the same way – as long as we’re discussing the TSX with the manual box.

On the first leg of our trip driving the freeways and back roads of Las Vegas, we got stuck driving… ahem, I mean we were given the opportunity to drive a 2006 Acura TSX with the five-speed autobox. In normal traffic, the automatic is sufficient for navigating hills and making quick lane changes but doesn’t bring out the sporting characteristics of the car. Get behind the wheel of a TSX with the six-speed manual, and if you could drive blind-folded (please don’t try this at home), you would swear you were in a different car. The TSX comes to life when the 2.4-liter four-cylinder engine is kept in the higher end of its rev range. Unfortunately most drivers won’t run the TSX in the rev range it loves best. Many won’t even approach it before each shift. It would be nice to have more of the power down low where it could be appreciated during day-to-day driving, especially for those choosing the automatic. Shifts are smooth and precise and with a redline of 7,000 rpm, if you dare run it in the sweet spot, the TSX loves to run hard. This powertrain combination is sweet, but sadly, most buyers of the TSX opt for the automatic transmission. They just don’t know what they’re missing.

During our drive we traversed many types of road surfaces. The 2006 Acura TSX was quiet and, in our opinion, the chassis actually behaved better than its big brother, the Acura RL, over the rough stuff. The TSX’s steering was exceptionally precise and nimble without being over-boosted, and fluently transmitted all necessary information from the road. Though the Acura TSX is not a sports car, it is aimed at the enthusiast driver and for the most part holds its own on twisty back roads. Thrown into a corner, the TSX exhibits slight understeer but remains neutral on exit. Keep the revs up on the manual transmission and the Acura TSX can be tossed from corner to corner with confidence. With the automatic, the TSX just doesn’t exhibit the same fun-to-drive characteristics but the reality is that customers opting for this transmission aren’t likely to be driving assertively over twisty back roads.

Comfort and Convenience The 2006 Acura TSX’s interior is appointed with leather seating and aluminum accents. Both front and rear occupants are treated to leather seating and plenty of head and legroom. Quietness at speed tops off the list of refinements.

Given the TSX’s rather small size, it’s surprising how comfortable the front seats are. And for a sedan, they provide ample bolstering as well as support. In the rear seat, however, it’s another story. Using my six-foot-two driving partner’s seating position as a benchmark, my five-foot-eleven frame was crowded for room and my knees were flush against the driver’s seatback. With shorter front-seat occupants, the 2006 Acura TSX can transport five adults in relative comfort – but I still wouldn’t want to be the fifth rider stuck in the middle of the back bench.

Simplicity marks the Acura TSX’s interior, which, in our test car, was decorated with aluminum accents and leather upholstery. A small, three-spoke steering wheel greets the driver upon entry and with an adjustable eight-way power seat, finding the perfect driving position is easy. New for 2006 is a two-position memory feature for the driver’s seat, linked to the keyless remote entry fob. Passengers get a four-way adjustable seat on the right side of the cockpit. Easy-to-read LED gauges grace the dash with the addition of a multi-function information screen located between the tach and speedometer. Simple-to-use knobs and buttons finish out the cockpit. Unlike many navigation systems, the TSX’s touch screen makes programming and finding information quick and easy. Got an iPod glued to your head most days? The TSX’s standard stereo system features a jack that allows it to play Windows-format and MP3 music files – a nice touch considering the CD is already on its way out.

Fit and finish on our test car was exemplary, and cargo space is impressive. Pop the trunk and you’ll find a spacious cavity with enough room for a couple weeks of groceries and a low liftover height to make loading easy. At 13.2 cu.-ft. (without navigation) or 12.8 cu.-ft. (with navigation), the size of the Acura TSX’s trunk is accommodating.

What about the 2006 Acura TSX’s overall quality?
Our test vehicle was flawlessly assembled, and Honda enjoys a long-running reputation for quality. European competitors, uh, not so much. But Lexus should prove a formidable opponent with its IS 250.

Is free maintenance that big a deal that I should skip the 2006 Acura TSX for an Audi or BMW?
Generally, free maintenance is a huge cost-saving factor that should be given consideration before purchasing a vehicle, and a base Audi A4 with free maintenance just squeezes in under the Acura price-wise. But since the Acura includes lots of key features as standard equipment, and since it has proven to be reliable and inexpensive to maintain, the free maintenance programs at Audi and BMW are irrelevant. 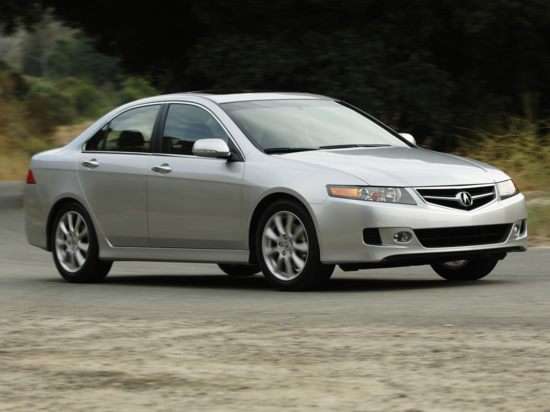