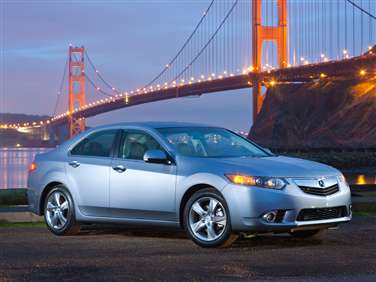 All About Acura TSX

The Acura TSX is a four door front-wheel drive compact sedan. After five years, the 2009 Acura TSX has received the long awaited overhaul. It has been completely redesigned inside and outside. The 2009 Acura TSX is a four-door entry level luxury sedan with only one trim level available. Changes on the outside include a new headlight design, a new grille with Acura’s shield design and a sportier lower bumper.

As for performance, the 2009 Acura TSX has few changes and remains as a sporty alternative within its class. The vehicle comes with a 2.4 L inline 4-cylinder engine that offers 201 horsepower and 170 lb-ft of torque. There is a choice when it comes to transmissions however. The engine can be paired to a six-speed manual or a five-speed automatic with steering wheel shift paddles. The light shifter and clutch action on the manual is a definite bonus with this vehicle, making it especially easy to drive in traffic. The automatic also gets high points for it’s smooth and quick shifts.

The newly designed interior features waves of black, silver and titanium colored trim, a tiered dashboard, new gauge controls, and an integrated control knob. There are almost too many dashboard buttons, over 40, which can easily confuse the driver. The vehicle easily seats five adults and as usual those in the front will be more comfortable than those in the rear. There are heated leather seats in front and storage pockets on all four doors. The trunk offers 12.6 cubic feet of actual storage that can be increased by laying the rear seats flat. Standard features include a leather-wrapped multifunction steering wheel, a power moonroof, Bluetooth-based cell phone connectivity, and dual-zone automatic air conditioning. Also included are satellite radio, MP3 integration USB port and a seven-speaker sound system. There is only one option to add in and that is the Acura TSX Technology Package. This upgrade comes in around $3,100. It’s more than just an improved sound system. It includes a top-of-the-line navigation system with traffic and weather reports.

One greatly appreciated improvement for the 2009 Acura TSX is a softening of the interior noise level; however, the engine sounds are louder when the vehicle is speeding up.

The safety features on the 2009 Acura TSX, as always, are excellent. The National Highway Traffic Safety Administration (NHTSA) crash tests have given the TXS five stars for front and side impact tests for both passengers and the driver.The 2009 Acura TSX was awarded the Top Safety Pick by Insurance Institute for Highway Safety (IIHS). Part of the reason for its excellent safety standing is the incorporation of Acura’s Compatibility Engineering body technology. Standard with the vehicle are antilock brakes with brake assist, traction control, stability control, front side airbags, full-length side curtain airbags, active head restraints for the front seats and there is an option to include a navigation system with a backup camera.