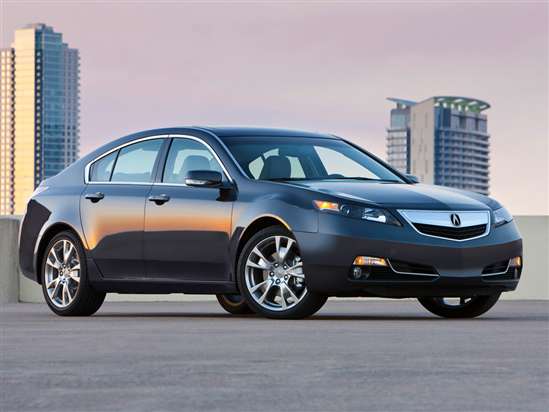 Aside from making the Special Edition model that arrived halfway through last year an official member of the 2014 TL lineup, Acura makes no changes to its midsize luxury sports sedan. This is the final year for the TL. The 2015 Acura TLX replaces it next year.

What makes the Special Edition so special? The leather seats feature contrast stitching, and this version of the TL gets standard Keyless Access passive entry with push-button engine starting. It can be told apart from other TL models by unique 18-inch aluminum wheels, a subtle decklid spoiler, and unique badges. The TL SH-AWD is the performance model, providing a more powerful engine, Acura’s Super Handling AWD system, unique wheel designs, and more aggressive tires.

A 280-horsepower, 3.5-liter V-6 engine is installed under the hoods of the TL and TL Special Edition, driving the car’s front wheels through a 6-speed automatic transmission with paddle shifters.

Choose the TL SH-AWD, and a 305-horsepower, 3.7-liter V-6 engine is paired with a 6-speed manual gearbox or the paddle-shifted automatic. This model’s Super Handling AWD system can put up to 70 percent of the engine’s output to one of the TL’s rear wheels for a torque-vectoring effect that makes this version of Acura’s luxury sport sedan particularly gratifying to drive hard and fast.

According to the EPA, the 2014 TL and TL Special Edition models will return 23 mpg in combined driving, operating on premium fuel. The SH-AWD models are not quite as fuel-efficient, with the manual gearbox delivering 20 mpg and the automatic providing 21 mpg.

The Insurance Institute for Highway Safety (IIHS) is more optimistic about the TL’s crash protection capabilities. It receives a “Top Safety Pick” rating for 2014, despite the adoption of new, stricter guidelines by the IIHS.

Add the optional Technology Package, and the TL is equipped with a premium sound system, a navigation system with real-time traffic and weather reports, a reversing camera, keyless passive entry with push-button starting, and a solar-sensing, GPS-linked climate control system. Opt for the Advance Package, and Acura throws in a Blind Spot Information System.