Fresh off a redesign for the 2013 model year, the Acura RDX went into 2014 with no changes. And frankly, it’s just as well, because the RDX is one of the most competitive vehicles in the premium small crossover segment. Offering a nice blend of remarkable driving enjoyment and reasonable fuel economy, along with significant comfort and versatility, the Acura RDX is a benchmark.

Still, there are some other really strong candidates in this arena; Audi, BMW, Range Rover, and Volvo all have talented players—each with their own particular set of charming attributes. Still, the Acura offers considerable refinement, a reputation for solid reliability, and a generous list of standard features. Yes, the Acura has a value story too. Which, when it comes to luxury crossovers, is an oft-overlooked attribute.

Long story short, Acura’s small crossover has a lot going for it.

The 2014 RDX standard equipment roster encompasses a set of 18-inch alloy wheels, a pair of heated exterior side-view mirrors, as well as darkened privacy glass for the rear passengers and the cargo compartment. Also included are automatic headlights, a rearview camera, a sunroof, and keyless entry and start.

The RDX got an all-new look for the 2013 model year, so the 2014 model year RDX continues unchanged. Immediately recognizable as an Acura product, thanks to its angular styling elements and the “Shield of Acura” grille plate, the look of the RDX is at once sleek and voluminous. The horizontal elements give the crossover a more substantial appearance, while at the same time enabling it to avoid a “heavy” appearance.

The hood is low, giving the Acura a sporty appearance, while simultaneously improving the forward view for the driver. The exterior rear-view mirror housings were shaped to improve the driver’s sightlines around the “A” pillar. The driver’s side mirror also incorporates an expanded-view lens, providing a wider field of vision to cover the blind spot.

Returning to the grille for a moment, it was reshaped in a way such as to incorporate the headlights, giving the face of the RDX a sharper, more aggressive appearance—while remaining friendly. The doors were redesigned to open wider, as was the rear hatch. These are somewhat disguised by the tapering rear roof, which enables the overall appearance of the Acura to look light and agile, rather than ponderous and clumsy.

First-time Acura pilots may find the driver’s interface a bit on the busy side, but a few moments of study reveals the thought and attention to organization its designers applied to the layout. A driver-centric design, the cockpit of the RDX strongly reflects the tech orientation for which Acura models are well known.

Even the base model RDX features a 360-watt audi system, Active Noise Cancellation (to quiet the interior) and Internet audio streaming. The primary instrumentation is backlit with LEDs, the rear view camera shows three unique viewing angles, and keyless access and text messaging are also all included in the base price.

Buttons on the steering wheel place audio system and cruise control switches closest to the driver. This, along with the placement of the climate control system in the center stack enables the actuation of these features with minimal attention diverted from the road. Paddles behind the steering wheel facilitate the operation of the transmission’s manual mode, permitting the execution of gear changes without removing your hands from the steering wheel.

Opt for the Tech package (with which our test car was equipped), and you’ll find a voice activated navigation system capable of providing real-time traffic alerts and weather. In addition to apprising you of weather conditions along your chosen route, it can also determine an alternate course if the drive to your destination is impeded by heavy traffic.

With that said, some of the graphic readouts really could use some serious updating, as they look—well—dated. In a car with this much on the ball on the tech front, it seems a bit wacky to monitor those systems with such crude graphic treatments.

Considerable attention was paid to the Acura’s occupants. As we mentioned earlier, the front doors were redesigned to open wider, and the rear doors have larger opening overall. Along with these more generous ingress/egress portals, the new RDX features one-touch activation for the 60/40 split-folding rear seatbacks.

The new interior design also provided more legroom and shoulder room for passengers in both the front and rear seating positions.  Touted to offer the largest amount of passenger volume in its class, the RDX provides 105.3 cubic feet of people space. Cargo capability is a very significant 76.9 cubic feet with the rear seatbacks folded. With them in place, the Acura will carry 26.1 cubic feet of your favorite stuff.

Interior storage compartments include a large center console between the front seats, and numerous storage pockets along with a wide variety of cubby spaces throughout the RDX to cater to your inner pack rat.

The multi-adjustable front seats feature perforated leather upholstery and are heated for additional comfort. Sharply sculpted, they are very supportive over long drives and are well bolstered to provide excellent containment in more aggressive driving situations.

Other safety features include antilock brakes, traction control, front side airbags, side curtain airbags, and active front head restraints. A rearview camera is standard as well.

According to the Insurance Institute of Highway Safety, the 2014 Acura RDX scored “good” (the organization’s highest rating) in its crash testing exercises. NHTSA similarly gave the RDX a five-star safety rating, with the model passing all of its New Car Assessment Program tests with considerable aplomb.

The RDX is powered by Honda’s 3.5-liter V6 engine producing 273 horsepower and 251 ft-lbs of torque. With the redesign, the RDX was treated to V6 power for the first time in 2013—replacing the previous 2.3-liter inline four cylinder powerplant. The V6 uses a pair of cams and variable valve timing. It also feature Variable Cylinder Management, enabling it to run on three cylinders when under light load, such as at a steady speed on the highway. This is aimed at improving fuel economy. Virtually seamless in operation, only by listening very carefully could we detect the switchover to the cylinder deactivation mode. It’s all but invisible to only the most sensitive of drivers. The engine also employs direct ignition and a cold air intake.

Honda’s Sequential Sport-Shift six-speed automatic transmission and a multi-clutch lock-up torque converter serve as the connecting links in the powertrain, routing the output of the engine to either the front wheels, or all four if the all-wheel drive option is selected. The transmission is equipped with three shift modes (normal, sport, and manual). It also features Grade Logic Control to prevent upshifts in the middle of a hill, Shift Hold Control, to permit the driver to hold the transmission in a given gear to optimize torque delivery, and Cornering Shift G Control to prevent gear changes in the middle of a corner.

The RDX does without Honda’s highly touted Super-Handling torque transferring all-wheel drive system in favor of a more conventional solution. It’s not as sporty, but competent nonetheless. Fuel economy is quoted at 20 miles per gallon in the city, 28 on the highway, and 23 combined with front-wheel drive, while the all-wheel drive powertrain featured in our test RDX is quoted at 19 city, 27 on the highway, and 22 combined. We averaged 20 miles per gallon overall.

The brilliant thing about Acura’s automobiles is the way they deliver outstanding driving fun, even though they also function in such a mainstream fashion. The V6 offers smooth, powerful and continuous output all the way to redline. It winds freely, and like most Honda powerplants, delivers its strongest output in the upper part of the rev range. What’s more, the harder you run this engine the better it sounds.

Now, with that said, you don’t have to drive the Acura like a racing car to get it to perform well in day-to-day operation. The smoothness of the V6 also translates to quiet competent power in less demanding driving situations. The RDX is perfectly happy shuttling around town handling mundanities.

The transmission changes gears crisply, and responds well to inputs from the shift paddles. The steering is a bit on the light side, but it’s precise and the RDX handles turns with confidence. The brakes feel very positive and inspire a great deal of reassurance. Long story short, the RDX offers a very engaging driving experience, one equally rewarding whether your thing is aggressive corner carving, or just running down to the corner store to pick up some groceries.

In a segment as competitive as this, managing to function as one of the frontrunners is quite a feat. The RDX does so thanks to a combination of a reasonable price, a comfortable ride, a quiet interior, and a high fun to drive quotient. The RDX also provides an elevated level of infotainment technology—though some of the more cutting edge safety features like Lane Keep Assist, Blind Spot Monitoring, and smart cruise control aren’t available. Honda reserves those features for the RDXs MDX big sister. Bottom line though, for the price, while the Acura RDX is a “should consider”, other models in its competitive set offer just as much appeal. 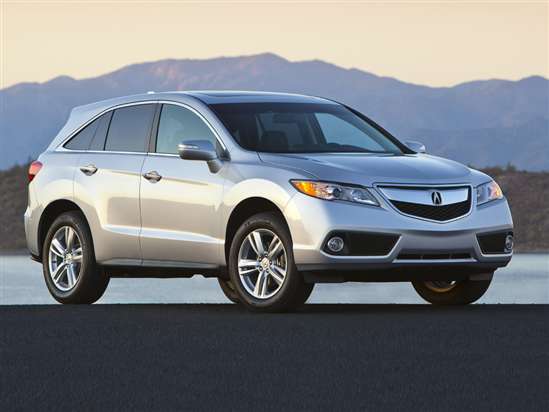