Acura didn’t sit on its hands after the immediate success of the Lexus RX, Mercedes M-Class (now the GLE), and the BMW X5. Honda’s luxury brand quickly created its own SUV, one of the first in the class with a third-row seat, and launched the MDX 2001. It quickly became the luxury brand’s top seller, it remains its volume leader today, and Acura says the MDX is America's best-selling three-row luxury suv of all time.

Now in its third-generation, the 2018 MDX is still Acura’s largest and most family-friendly SUV, with seven-passenger seating, all-wheel drive, and a standard V6 engine. The stylish MDX is a standout in its class, with impressive performance, in-cabin technology, and safety ratings. And to increase its appeal, last year Acura introduced the more powerful and efficient Sport Hybrid variant. The MDX competes against a long list of luxurious rivals including the Mercedes-Benz GLE, BMW X5, Audi Q7, Lexus RX, Infiniti QX60, and Volvo XC90. Like five of Acura’s six models, the MDX is built in Ohio, and 70% of its parts are sourced from the United States and Canada.

Prices start at $45,195, including $995 destination and handling fee, for an MDX Standard with front-wheel drive. Acura likes awkward acronyms, but on the MDX there’s only one you really need to know about: SH-AWD. It stands for Super Handling All-Wheel Drive, and it’s available on all four trim levels of the MDX for an additional $2,000. Under the hood is a 290-horsepower 3.5-liter all-aluminum V6 that works with a nine-speed automatic transmission. Our test vehicle represents the top of the range, an MDX with all-wheel drive and the Advance, Technology, and Entertainment Packages. It cost $59,645.

Meanwhile, every MDX Sport Hybrid gets all-wheel drive. Pricing starts at $53,095 but jumps to $59,145 if you add the Advance Package. This model shares much of its hybrid technology with the NSX supercar and RLX sedan. Its powertrain combines a 3.0-liter V6 engine, a battery pack, and three electric motors for a total output of 321 hp. Despite its additional weight and power, the Sport Hybrid betters the base MDX’s fuel economy in the city by 45%.

Overall, the 2018 Acura MDX delivers good fuel economy for the mid-size luxury SUV class. With two-wheel drive, the SUV is rated by the EPA to achieve a best of 20 mpg in the city and 27 mpg on the highway. That’s the same as the front-wheel drive Lexus RX 350. With all-wheel drive, the Acura’s numbers dip to 19 mpg city and 26 mpg highway. Fuel economy ratings for the Sport Hybrid are 26 mpg city and 27 mpg highway. That’s significantly up from the standard MDX, but they're lower than the mileage ratings for the Lexus RX 450h hybrid.

In our non-hybrid MDX, we averaged 22 mpg in mixed driving over 10 days in Los Angeles using the SUV's sporty Dynamic mode about 25 percent of the time. We also made use of its start/stop technology, which shuts off the engine at idle to conserve fuel, about 50 percent of the time. Although Acura recommends premium 91-octane fuel for maximum performance, to keep operating costs down, the MDX will run happily on less-expensive regular-grade 87-octane gasoline.

Turbocharged small-displacement engines are all the rage, but not under the hood of the 2018 Acura MDX. For nearly two decades, the SUV has been powered by a big, potent, naturally aspirated V6, and it still is. It’s a great engine with smooth operation and plenty of power. The Acura’s 3.5-liter gets the big SUV off the line with enthusiasm. Put the pedal to the medal and the MDX will hit 60 mph in less than 6.0 seconds. The responsive nine-speed automatic is well-geared for the big V6, and gear changes are smooth. The transmission also has a Sport mode, which noticeably tightens its response, and it matches revs when you downshift it manually with the standard paddle shifters.

You can also change the feel and performance of the MDX with the SUV’s Integrated Dynamics System depending on your mood and the driving conditions. It offers three modes: Comfort, Normal, and Sport. Each retunes the throttle response and the weight of the steering. Although the steering was a little too heavy in Sport mode, it became our go-to when slicing the MDX through LA traffic.

Like BMW, Acura is known for its excellent steering, and the precise system in the MDX is one of the best in its class, offering a good feel for the road through the SUV’s leather-wrapped steering wheel. Unlike some of its German competitors, the MDX doesn’t feel too big or obese. It feels solid — like a large SUV should — but it doesn’t drive heavy. It feels light on its feet. On your favorite on-ramp, the one with the off-camber decreasing radius left-hander, the Acura’s all-wheel drive system gives the MDX a locked-down with good balance and grip. That all-wheel drive system, which can transfer power from front to back as well as side to side, also makes the MDX very stable on the highway.

Acura should also be very proud of the way the MDX rides. This SUV nails the sweet spot between sport and luxury, which isn’t easy. Considering our test vehicle rode on large 20-inch wheels makes it a truly praiseworthy achievement.

Seat comfort is very high inside the 2018 Acura MDX, and the interior’s overall fit and finish is exceptional. Our test car’s white leather upholstery, matte wood trim, and aluminum accents gave the SUV a rich ambiance. However, its dual infotainment screens do take a little getting used too. The interface combines a touchscreen and a large knob, which all works well enough, but a single generously sized touchscreen is still the way to go. Some may also find the Acura’s unusual push-button shifter to be intimidating, but it ceases to be a problem after the first few days.

The MDX features a flat floor, which improves comfort in the rear rows of seats. The second row reclines, and it offers plenty of legroom and headroom even if you’re 6 feet tall. Our test vehicle had rear climate controls and vents, heated rear seats, and adjustable headrests. Also an optional rear entertainment system with wireless headsets and a huge screen that flips down from the headliner. The MDX's third row can fit vertically challenged adults for short rides, but it’s really for a couple of kids.

Cargo space behind the third row is significantly larger than we expected, and there’s even some hidden storage under the floor. With the split third row folded flat, the MDX offers 38.4 cubic feet of space, which is a little more than you get in the BMW X5. With the second row also folded flat, there’s 90.9 cubic feet, which puts the Acura among the class leaders. A power-operated liftgate is standard.

Last year, Acura made AcuraWatch — the brand’s full suite of driver aids — standard on every MDX. Our test vehicle came equipped with a collision-mitigating braking system; lane-departure and forward-collision warnings; lane-keep assist, which actually steers the MDX gently back into the center of your lane; adaptive cruise control with low-speed follow that can work in stop-and-go traffic; and road-departure mitigation. All models also come with a multi-angle rearview camera, while upper trim levels also get a blind-spot monitor, front and rear parking sensors, a rear cross-traffic monitor, and automatic high beams.

Additionally, the 2018 MDX earned five stars overall from the National Highway Traffic Safety Administration for its crash-test performance. The Acura has also been named a Top Safety Pick by the Insurance Institute for Highway Safety.

Another safety innovation is the MDX’s sexy LED headlamp design, which Acura calls Jewel-Eye. The lights not only look unique and set off the SUV’s radical front end, but they are also some of the brightest headlights we’ve come across.

These lights were revised just last year, along with the MDX's grille, front bumper, hood, front fenders, rocker trim, rear bumper, and chrome exhaust tips. The new look is a huge improvement, taking this Acura from frumpy to fair maiden. The attractive MDX isn’t the most radical-looking SUV out there, although our test vehicle looked a little extra racy dressed in San Marino Red with black wheels, it also isn’t the most conservative either. Exterior build quality is exceptional.

Our biggest complaint about the MDX is its key, which is too big and too heavy. There’s no need for the SUV’s key to weigh more than my iPhone.

Almost everything else about this well-appointed, comfortable and fun to drive seven-passenger SUV is on-point. With its new look, its smooth and powerful engine, and its long list of standard high-tech safety systems, the 2018 Acura MDX is one of our favorites in a very competitive class. 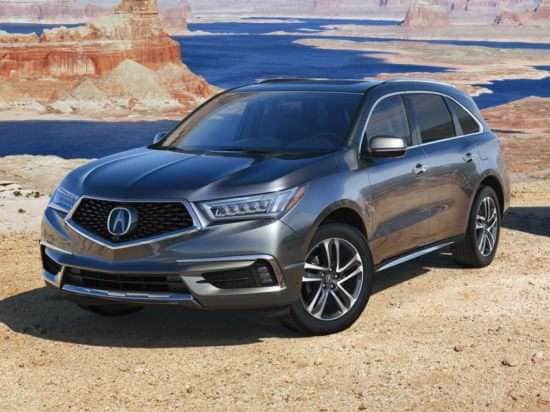