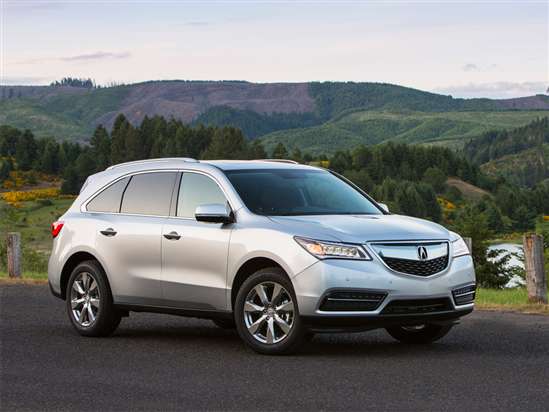 One year after debuting a completely redesigned MDX, Acura makes no changes to the 2015 model.

The Advance Package represents the top-of-the-line model. It has everything listed above, swapping out the 9-inch screen for a 16.2-inch widescreen display. Additionally, this version of the MDX contains heated and ventilated sport seats up front, premium leather upholstery, remote engine starting, and auto-dimming side mirrors. Front and rear parking sensors are also standard for this model, as well as an adaptive cruise control system with low-speed follow capability, autonomous braking to help avoid collisions, and an autonomous lane-keeping assist system. Models with the Advance Package have their own 7-spoke aluminum wheels.

All MDX models have a 290-horsepower, 3.5-liter V-6 engine and a 6-speed automatic transmission with paddle shifters and Grade Logic Control. Naturally, the MDX SH-AWD has an all-wheel-drive system, the “SH” added to the description for the way it continually adjusts how power is distributed to account for factors such as wheel speed, steering angle, yaw rate, lateral G-force, traction, and even weight distribution. To improve cornering, the SH-AWD system can put up to 70 percent of engine output to the outside rear wheel.

In combined driving, the 2015 MDX gets 23 mpg with front-wheel drive and 21 mpg with SH-AWD, according to the EPA. Acura says the MDX requires premium fuel.

In every single NHTSA crash-test assessment, the 2015 Acura MDX gets a 5-star rating. Combine that performance with a 4-star rating for rollover resistance, and you’ve got one safe luxury crossover SUV.

Ratings from the Insurance Institute for Highway Safety (IIHS) support this statement. The MDX is a “Top Safety Pick,” and when equipped with the Advance Package earns the “Top Safety Pick+” accolade.

If you’re wondering what does not cost extra when buying a new Acura MDX, take a look this SUV’s headlights. They’re an array of LEDs. You also get a multi-angle reversing camera, automatic climate control, a power rear liftgate, and a touchscreen infotainment system including Bluetooth connectivity, text messaging support, satellite radio, and access to Pandora Internet radio.

For a higher-tech MDX ownership experience, plan to upgrade to one of the packages detailed above.